I spoke with Jay Turo, the CEO of Growthink, a investment banking firm located in Southern California.  He shared the matrix below (again from the Kauffman Foundation) on the danger of taking Venture Capital. A big take away from this matrix: a firm achieves the highest financial return by NOT taking VC money. 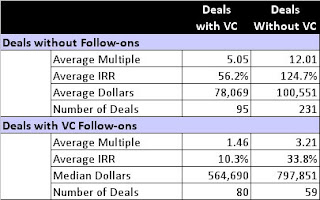 The data was self-reported (this may bias the data, although I am not sure which direction). Also, this data set includes a lot of deals done in the 1998-2000 period which may influence the data also.

But what does this mean for the Space Entrepreneur? Let’s look at the Suborbital industry as an example. Most of these young suborbital companies are bootstrapped or Angel-funded. But over the coming years, the profile of the industry will rise through mission success, the potential for increased NASA-funded projects, and increased speed to market of derivative products/services. As industry awareness grows, VC interest in the industry will undoubtedly increase. But do these young space firms want money from venture capital sources? But if not from the VC's, then from where?  With young software/Internet firms: a few hundred $K, a good idea, and frugal management can get you to market. As a general rule, Space entrepreneurs will need more capital to bring a product to market. I envision scenarios where these companies demonstrate a significant milestone like a flight to XX altitude. To go higher and faster, they need more capital for additional equipment and personnel. Will Angel funding be large enough for the needs of these growing firms? If angel funding is insufficient to reach the next major company milestone, the siren call of VCs will be alluring. If VC funding can taint a company (for reasons I am not going to get into today), what can be done to insulated the New Space industry from that siren call of VC funding while still promoting Industry growth?

Here are some potential solutions:

Venture Capital is like fire, a very powerful tool allowing some firms to achieve the impossible and change the world. But it is fire...I just hate singed eyebrows.
Posted by Colin Doughan at 3:48 PM