But Then I Remember John Powell 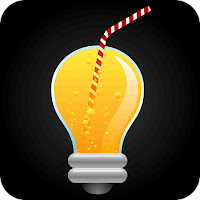 On a recent Space Show, John Powell of JP Aerospace admitted he was forced to seek patent protection for elements of his upper-atmosphere balloon technology to prevent potential competitors from procuring a patent for HIS technology and forcing John to either stop work or pay his competitor a royalty (this topic comes up about 36:30 into the Space Show episode).  Although John was pleased to have the patent, John was more interested in maintaining his ability to work
on his technology free of interference.

I have been thinking about innovation lately and how to encourage innovation within the New Space Family. The latest innovation research has some interesting implications for New Space. Here is a short summary (4 min) of Steve Johnson’s book, Where Good Ideas Come From.

It really is simple math:

If an entrepreneur approached me and wanted to start a new space company focused on innovation and expanding the “new space market pie”, the Johnson's innovation research from the video above would direct me to prescribe a culture of openness: open about company plans, open about ideas (especially the embryonic ones), open about company successes, open about company failures, etc. Be as open as possible. If the innovation experts are correct this openness would:
But then I remember John Powell – John was forced to seek patents for defensive purposes. Patents don’t seem very open. Does this mean I can’t share an idea (especially embryonic ideas) until after I have a patent? If the most valuable time to share an idea is when the idea is half-baked, then how could I dare do that outside the company and risk losing the idea altogether to patent-wielding technology poachers. The best time to share the idea is before the idea is complete enough to patent.

Hypothetically, if there were no such thing as patents in the aerospace industry, my innovation firm would be just fine. Their continued competitive advantage would come from out-innovating the competition, utilizing an open exchange of ideas to magnify their advantage, and through open sharing of ideas, helping neighboring firms grow their ideas and the industry as a whole. But then I remember John Powell.

Here is a longer (17min) Ted Talk where Steve Johnson speaks about the value in sharing what he calls “hunches.”

Posted by Colin Doughan at 10:37 PM No comments:

The Power of Video to grow New Space

Do you remember the early updates Armadillo gave on their rocket development progress?  They were open about both their successes and failures.  First the updates were text based.  Then pictures were added.  And then, with flame in the machine shop, came Video.  And video. And Video.

We not only watched the Lunar Lander Challenge live via the web, but in the months leading up to the official attempts to win the prize, Masten and Armadillo both posted videos showcasing their progress.  These videos became bragging rights, milestones, marketing opportunities, insights into their technologies (you better believe Masten and Armadillo disected each other's videos looking for any advantage).  And even after the LLC, the videos continue (maybe not as many as we would like), but..

And the video is not poor quality.  These companies recognize the marketing power of these videos.
Multiple camera angles.  Video.
High Quality recordings.  Video.

Video has power.  Video connects a community in a way text and pictures cannot.  Below is a Ted Talk by Chris Anderson on the power of video to promote innovation in a community especially those communities whose finished product cannot be emailed to others (think software).  Chris's talk is 18 minutes.  Watch it and ask yourself, just like Masten and Armadillo, how can New Space use this medium to share more and push humanity out to LEO and beyond.  Thanks Chris.  Good stuff. 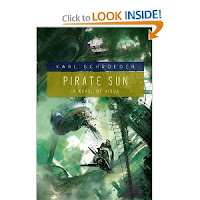 I occasionally take a break from reading value-add leadership and Business books to read books that let me dream a little. My latest dream book (good summer reading) is Pirate Sun, book three of Virga. The adventures take place in an planet-sized fullerene bubble on the edge of a distant solar system. The bubble is filled with breathable air and other natural resources. The only gravity is generated from spinning cylindrical “town wheels”. The series is probably inspired by Larry Niven's Ringworld or Bob Shaw's Orbitsville.

A fascinating character from Pirate Sun is a short muscular man raised from an infant by an authoritative regime on a town wheel with 2g’s constant gravity. Although such a high gravity permanently shortened his stature, the effects of heightened gravity gave him a significant strength advantages when, as a soldier, he attacked those from town wheels with lesser gravity.

This fantasy got me thinking about artificial gravity applications of spinning a spacecraft. As I hear scientists discuss artificial gravity they mention 1g as a formula that for sure works for humans. And they discuss the desire to test long term impacts of one-sixth and one-third gravity for obvious reasons (moon and Mars), but I would be interested in evaluating the health impacts from sustained increased gravity. Okay, so we don’t send infants into orbit to prepare them for a life of forced service as an “Atlas”. But could some level of increased gravity prior to a long-duration mission outside of LEO give astronauts any heightened resiliency to the ravaging effects of micro-gravity?

And while we are on the topic. I really don’t see significant orbital tourism taking off until space stations offer artificial gravity in the bedrooms (as a minimum). Sure it’s fun to float around during the day, but high-paying space tourists (the kind that want a romantic second honey-moon, not the kind that have already climbed Everest) will want and expect their meals and personal bedroom cabins to contain 1g. The successful space hotels will offer gravity as a the norm with weightlessness as an optional activity to enjoy.

Now…back to my business books.
Posted by Colin Doughan at 12:31 PM 3 comments:

I see today, Jonathan Goff announced the creation of the latest new space company, Altius Space Machines. Jon was one of the founding members of Masten Space Systems, winner of NASA’s Lunar Lander Challenge and Masten’s lead propulsion engineer. Now Mr. Goff is leaving Masten to start his own aerospace company.  Masten’s blog highlights their new talent they hired both to replace recent departures and arm the company with the talent to climb to 100KM and beyond.


After reading of these developments, here are a few thoughts: