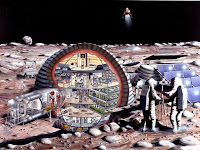 Below is my interview with Alan Wasser, one of the premier legal authorities on Space Property Rights. Alan has always explained complicated legal concepts in a way my business mind could understand.  Alan believes the scale of current space investment is too small. Alan's plan for "land claims recognition" legislation holds the potential to dramatically increase the size and scale of investment in space, but is such a concept politically possible?  Read on for the details…


Question: How do you think space activists should react to the Obama administration's new space policy?

Alan: I'm just hoping that, now that the President has made it official, the space activist community will finally face up to the truth. On April 15th, at the Kennedy Space Center, The President said:


"Now, I understand that some believe that we should attempt a return to the surface of the Moon first, as previously planned. But I just have to say pretty bluntly here: We've been there before. Buzz has been there."

Maybe, someday, a flags and footsteps mission to Mars, - maybe - someday, - but the taxpayers are certainly not going to let the government pay for a settlement there either.  So, if you believe, as I do, that the settlement of space is vital for the human species, you've got an unpleasant choice to make:

Option 1: You can stay in a state of denial - insisting that, someday, somehow, Apollo will return, or a pure philanthropist godmother will magically give space to you -

Option 2: You can face the fact that the only way to make the settlement of space happen is to get the for-profit entrepreneurs interested.  Profit. The profit motivation. Capitalism. The love of money is the root of all evil. Racing to open the frontier so the winner can get even more filthy rich.

Ugh!  Disgusting. What will people think of us for suggesting such a thing?  We could only consider that as the absolute last resort.

Yup! That's what we're down to. A lot of space activists will cling to Option 1 at first, but eventually many will accept that "for profit" really is the only way the human habitat can be expanded out beyond the Earth. We're down to our absolute last choice - or nothing.  If Obama could have funded Constellation, he would have. The President's choice to speak on April 15th, income tax day, tells you why he couldn't.

National prestige once required the US to have the world's tallest building. But, eventually the public stopped measuring national prestige the old way. Government space programs, like the world's tallest buildings, have become prestige items for second and third rate powers. Apollo turns out to have been a one-shot event, specific to its era, not the template for space development. Ever since, space supporters have been trying - and failing - over and over again, to convince US taxpayers they need a robust national government space program for spin-offs, incentives for engineering education, jobs, NEO warnings, etc. etc. etc.

So it is up to free enterprise to open the space frontier, but that can happen only when there's a potential profit from it large enough to justify the huge risks and long lead time the project requires.

Question: Are there near-term profit motives large enough to incentivize such a push into space?

Alan: The best possibility is the idea of "land claims recognition", harnessing the huge potential value of Lunar and Martian land. It’s the only thing on the Moon that is valuable enough, and the hunt for new lands has always been the driver for human exploration and settlement.

Land claims recognition legislation would commit the Earth’s nations, in advance, to allowing a true private Lunar settlement to claim and sell (to people back on Earth) a reasonable amount of Lunar real estate in the area around the base, thus giving the founders of the Moon colony a way to earn back the investment they made to establish it.

For the details of such a proposal, and its legal basis under international law, see "Space Settlements, Property Rights, and International Law: Could a Lunar Settlement Claim The Lunar Real Estate It Needs To Survive?" which was published in SMU Law School's Journal of Air Law & Commerce, the leading law journal in its field.  Or, for a less legalistic description, with the answers to frequently asked questions, try this one.

Alan: Yes, but no. The problem is that their source of funds is still, ultimately, the US taxpayer.

In effect, we're just changing the kind of government contracts from "cost plus" to "fixed price". Probably a good thing, but nowhere near enough, because ultimately the same anti-tax forces will make sure that pool of money - "their" money - stays too small to fund a government space settlement.  We need a space industry that pays taxes, instead of one that depends on them.

Sending astronauts to the Space Station will be the first revenue stream for private space development. The second revenue stream will be space tourists, starting with the very rich, of course, but expanding as soon as possible to an ever widening segment of the public.

Unfortunately, however, those and all other currently identified revenue streams added together aren't enough to attract real venture capitalists, only enough to attract rich philanthropists. So it's important to look for new, novel profit potentials, like Land Claims Recognition.

Speaking of rich philanthropists, they can unfortunately provide some space activists a way to pretend they support "commercial space" without the unpleasant necessity of dealing with real commerce's need for true profit. They see Elon Musk's motives in SpaceX as "pure", so those squeamish space activists can ignore the fact that Elon made the tons of money he's spending on space from real commerce - selling an intangible service for a gigantic profit.

A true commercial business can raise vastly more investment capital than a charity. SpaceX has hundreds of millions, space settlement will take billions or tens of billions. We can't keep ducking the need for a real big PayPal-style profit potential, commercially generated, not taxpayer financed.

Alan: Definitely! One of the best examples is Eric Rice, CEO of Orbitec, a true commercial space company, who realized how logical this idea was several years ago and has done a great job of promoting it ever since. Earlier this year, he got a generous NASA Steckler grant to study the idea. Rice also served as a past President of the American Institute of Aeronautics and Astronautics (AIAA) Space Colonization Technical Committee, and he led six AIAA SCTC members on a Congressional lobbying effort in March 2010 that's led to a web discussion forum on the subject that includes a dozen key legislative space aides already.

He’s even posted a very slightly different version of my proposed draft law here.
He’s asking for feedback, and you can leave comments on the draft bill here.

Question: With Congressional staffers already reviewing and commenting on this draft bill, what are the next steps to get a revised bill to the US Congress?

Alan: Well, we still have a long way to go. The biggest step is to get one or more Congressmen and Senators to sponsor the bill. No one has gone that far, yet. It would also help a lot if more space activists took up the cause and started asking their own representatives about it.


Colin:  Thank you Alan!  I appreciate your efforts to expand humanity out into space.  I encourage my readers to review the draft land claims recognition bill.  Now is the time to make recommendations for needed changes to the bill.  The debate will be helpful to refine the bill.
Posted by Colin Doughan at 9:55 PM