Back in June, guest blogger, Kirk Sorensen, over at Selenian Boondocks described a cool concept for generating artificial gravity from a tether (and a Canfield joint). I read the paper behind the concept.  Last week when Jon Goff at Selenian Boondocks followed up with this post about a Variable Gravity Research Facility (xGRF) as a Flagship Technology Demonstrator, it reminded me I needed to post some business applications for such a facility as well.

Could such a facility be run commercially? In the discussion below, I will use the International Space Station (ISS) as my example, but the model I present would work equally well with other orbital destinations like a Bigelow Aerospace habitat.
For us non-engineers, think of the xGRF as a Bigelow module (habitable volume) with a large tether attached. Because of the power (almost magic) of the conservation of angular momentum, when the tether is unwound, the station spins. When the tether is re-wound, the tether stops spinning (this is where the engineers shoot me for over simplifying – but you get the idea).
Selling Gravity

Could an entrepreneur run such a gravity facility at a profit? Their profit centers could be both the “gravity service” they offer (a night sleep under gravity) as well as the data they generate from the effects of varying levels of gravity on humans (for use by others in planning long-duration space flights). Those guests staying on an xGRF become both customer and lab rat. 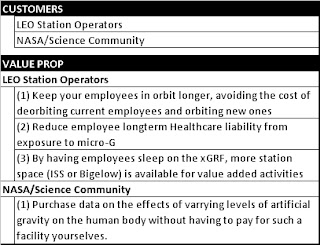 I don’t think it is too ambitious of a goal to return astronauts to earth with NO LONGTERM NEGATIVE EFFECTS from microgravity. Although obviously not achievable currently, I think we are all assuming humanity has to develop this capability someday – the current system in untenable. Is such life-enhancing

Let’s explore the idea of a commercial xGRF with an example: Put an xGRF in an orbit that would allow for frequent trips to the ISS (low transfer times between facilities and low delta-v costs). Astronauts would work in the microgravity environment of the ISS and sleep in the artificial gravity environment of the xGRF with daily transfer tugs moving astronauts between the two facilities. Co-locating an xGRF with the ISS could:
Here are the details:

Table 1 below highlights the productivity of three shifts of four astronauts transferring between ISS and xGRF daily: 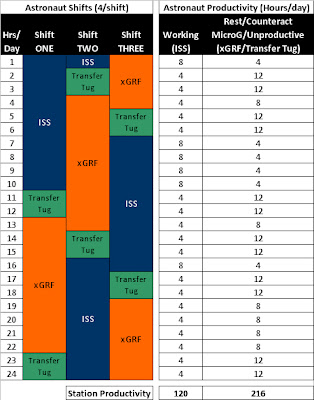 Table 2 below highlights the current productivity (note, exercise and sleep times are my estimates only): 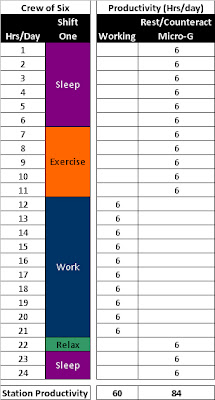 As with most tantalizing space business concepts, this one falls into the category of, “If I only had a billion dollars…” I do like Jon Goff’s idea of developing a xGRF as a NASA Flagship Technology Demonstrator. Regardless, once commercial station operators have achieved a few more milestones, this concept may be worth a deeper look – adding productivity to our astronauts in orbit and more importantly, improving the quality of life of those working off-world.
Posted by Colin Doughan at 9:44 PM