Mining on the Moon is an exciting topic.
has encouraged me to consider the near-term economics of lunar mining.  Brad Blair has been a very helpful resource to me as I learn more about this potentially lucrative future space market.

This is Part 1 of a two-part interview with Brad Blair as we discuss his 2002 paper entitled “Space Resource Economic Analysis Toolkit: The Case for Commercial Lunar Ice Mining.” Get your copy here.

In the interview below, Brad provides an overview of several lunar ice-mining architectures his team considered with a goal to make commercial lunar mining possible and profitable. I ask Blair how the recent success of SpaceX and the increased quantities of lunar data and water have effected this analysis.

In preparing this paper, Brad was very deliberate to provide not only his conclusions but also his assumptions. Readers of his paper will find the added detail quite helpful in developing their own models. Brad welcomes the feedback. The images used in this blog post are from the paper referenced above and used with permission from Brad Blair.

Who is Brad Blair? Dedicated to opening the space frontier for human settlement and commerce, Brad has spent twenty years developing technical and economic systems to enable planetary surface in-situ resource utilization (ISRU). As a professional space consultant to NASA, Bechtel Nevada, Raytheon and the Canadian Space Agency, he has authored or co-authored a number of technical reports and over 50 conference papers on topics related to accessing the wealth of space for the benefit of mankind. He holds a Bachelor's degree in Engineering Geology, and Master's degrees in Mining Engineering and Mineral Economics from the Colorado School of Mines.

Q. You describe your analysis as a combined engineering and financial model. You say in your paper, “an architecture optimized from an engineering point of view is not necessarily the most interesting for private investors.” What do you mean by this?

Brad Blair: Investors typically care a lot more about return on invested capital than about optimized hardware or new technology. An example can be found in the story of the development for NASA of a brand name space pen. A typical ballpoint pen is gravity fed, with the ink reservoir replenished due to storing it in the proper orientation. A special space pen was developed for NASA using a small pressurized bladder to ensure fluid flow in the proper direction under microgravity conditions. While engineers were able to successfully implement an elegant technical solution, the process required substantial amount of R&D with its associated cost. Production models are also costly due to the complexity of the system, and indeed can be found in many NASA Center gift stores. The Russian solution was to use a pencil. Commercial space enterprises will use pencils or other commercial off the shelf (COTS) hardware wherever possible. Cost optimization is very different than technical or engineering optimization.

Q. Your analysis described two main architectures. Describe these for us and how you came to favor these two options for profitably mining lunar ice.

Brad Blair: First I must point out that under the baseline starting conditions neither of the architectures showed profitability. Our process was to start with realistic assumptions and "worst case" costs (i.e., what a government space program would pay to develop all new hardware) and then relax the assumptions until an ROI was achieved that would attract private capital. The second architecture was slightly better than the first when these more relaxed or liberal conditions were modeled. Figures 4.1 and 4.2 of the report show pictures of the architectural elements and configurations.

For both architectures we assumed:


The primary difference between architectures:

According to our estimated delta-Vs, there was a slight advantage to operating a single propellant depot at L1 due to its ability to fall into various inclinations without a major penalty, thus increasing the number of customers that could be reached by a small set of vehicles and systems elements. 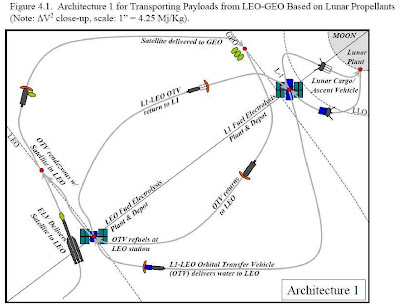 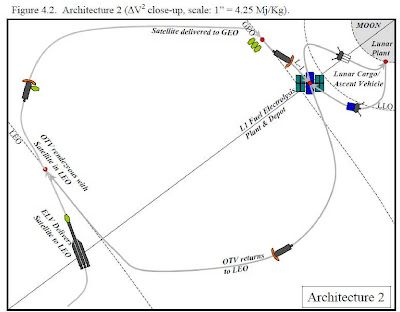 Q. The goal of your architectures is to be able to offer satellite transport from LEO to GEO via space tug for $25K/kg (with a preferred target price of $20K/kg). You also mention the counter intuitive fact that reduced launch costs actually hurt your business case. With Falcon 9’s price already at about $22K/kg to GEO (4540kg to GTO, $50M price, assume half GTO mass is kick-stage), how does such low launch prices affect your business case for lunar-based propellant?


Brad Blair: There would of course be a direct downward impact on revenue (it would be cut roughly in half according to your numbers above) given that the technical, cost and market assumptions of the 2002 study remain steady. However, a premium could be assessed for transferring payloads beyond the reach of the current fleet of expendable rockets.

For example, until someone builds another heavy lift vehicle there is only one way to move a 10 ton payload to GEO with today’s technology, and that would be by refueling an upper stage in LEO or by docking with an OTV that had a full tank (perhaps launched separately without a payload attached). In that case, the price backstop would be how much it costs to conduct the ops from Earth with all expendable systems – very costly if an HLLV is chosen and the development costs are amortized over the first few flights. The gist is that the revenue model for the 2002 study is fairly simplistic, and that updating it could involve both upward and downward adjustments in revenue streams. In either case the point is that the revenue model was based on estimating the cost of a terrestrial competitor for a specific mission profile and discounting that value a bit. Thus price can be modeled in a straightforward fashion using the same approach for future models.
Q. You argue in the Annual Market Demand section of your paper, “a thorough study should estimate the potential for new markets emerging from the availability of the space resource.” Talk about emerging markets for lunar resources and how influential emerging markets would play if you were to consider an update to your analysis.
Brad Blair: Emerging markets will make or break the business case. They are where the real action is at. It is an unreasonable expectation that current launch providers will simply give up their existing market share for LEO to GEO transfer and join the bandwagon. It will be an uphill battle and not be easy to win. Having said that, if sufficient additional customer demand can be stimulated in order to actually increase throughput of space vehicles in existing factories and benefit not only the propellant provider but launch vehicle manufacturers as well, a win-win scenario could emerge that will benefit all involved.
For example, a radical shift in on-orbit operations cost would enable orbital debris cleanup. I personally consider debris management the killer app or airmail of the 21st Century. As evidenced by the recent collision of Cosmos 2251 with Iridium 33, there is a growing danger of an exponentiating number of objects larger than 10cm. We are closer than many want to acknowledge to a chain reaction that could wipe out needed orbits for centuries or even millennia. With current technology it would become impossible for humans to penetrate the debris clouds that would result from a runaway reaction. Something needs to be done now, yet the excuse "it is just too costly" frequently emerges.

Reusability and propellants could change that dynamic. In my opinion, an international escrow account should be created and funded by some combination of the polluters and beneficiaries of cleanup. This would then be used to create a bounty on certain types of orbital debris. Then the marketplace itself would determine the best solutions to cleanup. If no takers emerge the first year, increase the bounty. If too many show up, decrease it. Once the coffers are empty wait until next year and they fill up again. It would be a self-regulating system that would begin to put a dent into one of the biggest "elephants in the room." Forget about the dangers of radiation - getting hit with a piece of gravel or a baseball going 10km/s is instant "game over" for an astronaut or spacecraft. 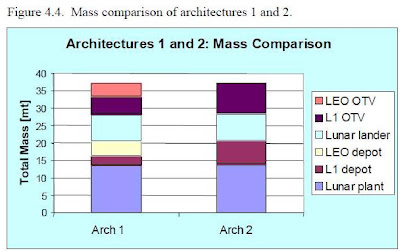 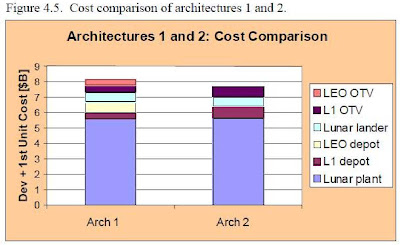 Q. You mention public/private partnerships in your paper. How dependent will lunar pioneers be on such financing that blends Government and investor money?

Brad Blair: Public private partnerships can be used to reduce various types of risk, thereby accelerating a commercial development timeline. For example, government investment in technology development could reduce operations risk and increase mission safety. Donation of time at costly lab facilities (e.g. large thermal vacuum chambers) could help space qualify commercial systems, reducing technical risk. Government-backed debt (e.g. bonds) could help reduce financing risk. Government anchor tenancy for products or services could reduce market risk. It is not as much an issue of dependency so much as the government having an ability to prime the pump and accelerate the schedule.

The trade off here is that by investing in certain ways the government can steer the outcome toward a beneficial public purpose. So there is a payoff to the taxpayer as well. For example, a private lunar mining outpost might make an excellent base camp for NASA human lunar exploration missions. Another example would be to incentivize data collection for potentially hazardous asteroids in partnership with a mineral exploration venture. In the end it doesn't matter whether the asteroid is mined into a new orbit or abruptly blasted out of the path of a dangerous keyhole. By combining effort, costs could be reduced on both the public and private side of the equation. A recommended criteria for entering a partnership is that both sides should benefit.

Q. Your analysis assumes no human miners involved on the lunar surface – all robotic. Describe how you came to this conclusion and if you still hold to this “human-free” approach to lunar mining.

Brad Blair: It was a simplifying assumption at first. It would certainly have a downward pressure on cost if it works. The reason I still believe it is possible is that I spent much of 2008 working with Dr. Greg Baiden of Sudbury, Canada writing an ISRU report for the Canadian Space Agency. While the report is still embargoed, it does conclude that robotic preparation of an underground human habitat does appear feasible.

This is based on Greg's experience as VP of research and development for INCO in the early 1990's, where he demonstrated that several pieces of underground mining equipment in two different mines could be run simultaneously from one operator cabin on the surface. The latency in the signal to and from the underground equipment approached 1.7 seconds. Estimates for lunar operations are in the 2.5 second ballpark. Based on that experience communication lag time may not be a major issue. You can listen here to a 2 hour interview with Greg at the Space Show.

The second hurdle will be maintenance and repair (which can and should be implemented for satellites as soon as possible by the way). It turns out that one of the reasons that terrestrial mining equipment breaks down so often is because the cost of repair is minimal. It should be possible to design lunar mining equipment to operate in a much more robust fashion and demonstrate the ruggedness in thermal vacuum with simulated lunar soils. Another important step would be to instrument a lunar surface exploration rover with wear and abrasion sensors in order to implement and get feedback on solutions before the mining equipment arrives. Estimates for the 2002 study were that 10% of equipment mass would need to be replaced per year. We even included in the model a 1 ton repair robot with the sole task of maintenance. 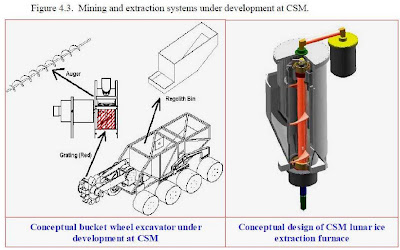