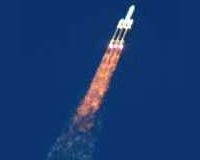 My son and I went out to Vandenberg with a picnic lunch to watch a rocket launch and ooooh, boy, what a rocket launch. The temp was a balmy 72 degrees. The breeze was calm. The sky was blue with a few wispy clouds. No fog, which is always a potential at Vandenberg.

We both felt the launch as well as heard it – felt it in our chests as the rocket fought to alter our heart beat to its own internal rhythms. But I was expecting the noise to be commensurate with the payload size…it was not. Loud, but not overwhelmingly so. Three flames pushing to the sky.

Best picnic launch my son I have had this week!
Posted by Colin Doughan at 2:58 PM