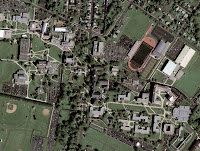 The use of Commercial Earth Imaging Satellites is growing. Individuals, corporations and governments are finding varied and unique applications for images of our planet. 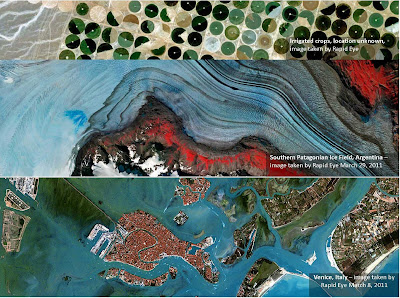 In a recent Nov 2010 paper, “6U CubeSat design for Earth observation with 6.5m GSD, five spectral bands and 14Mbps downlink,” author, Dr. Steven Tsitas outlines how a constellation of 6U CubeSats could serve Market #2 (frequent med-res images) competitively. (Sorry, I think you will have to buy the paper. If a reader finds a free version of the paper online, let me know and I will change the link). I hope to post an interview with Steven Tsitas soon.
But why even consider a CubeSat at all for such a mission? Here are just a few of the advantageous of using CubeSats:

Rapid Eye, a German company, is the current leader serving Market #2. Below I will provide some details about Rapid Eye and how a CubeSat constellation might be able to compete with Rapid Eye.  First, a little education about Rapid Eye.

I will build my business case, not from a technology discussion, but by attempting to answer the business question of - how much could an business save by using Cubesats instead of small sats?

If we assume the CubeSat venture would operate using the same Hardware and Operating Costs as the Rapid Eye venture, then the CubeSat savings are limited to the cost of the satellites themselves and the cost to launch them into orbit:
This would mean a CubeSat venture competing with Rapid Eye could theoretically lower image prices by twenty percentage points over competitors (all other things being equal). This by itself may close the business case for some CubeSat constellation investors.

But perhaps competing toe-to-toe with Rapid Eye is the wrong business model. As a general rule, it is hard to out Wal-Mart, Wal-Mart. What-if the CubeSat earth imaging venture could, instead, become the low-price, no frills, earth imaging provider?

In the earlier example, the CubeSat advantage was limited to lower satellite costs and cheaper rides to orbit on SpaceX launch vehicles. But what-if the venture could also save money on ground costs: Hardware/ground stations and operating expenses?

Here is a quick cost comparison between the options: 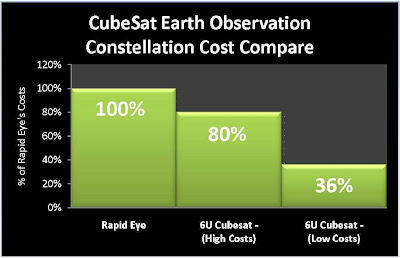 Posted by Colin Doughan at 2:36 PM