At Last Week's Space Tourism Society’s +10 Dinner, I spoke with two of the founders of XCOR: Aleta Jackson (Co-Founder/Chief Technician), and Dan DeLong (Vice President/Chief Engineer). We discussed general Lynx status, customers, regulation concerns for each flight, XCOR’s preference to fly out of standard airports, etc. And then we changed gears to discuss the Lynx’s “Dorsal pod” intending to ride a top of the Lynx.
Here is an image of the Lynx without the Dorsal pod – in tourist configuration (my term).

Here is an image of the Lynx with the Dorsal pod on top – in NanoSat configuration (again, my term). 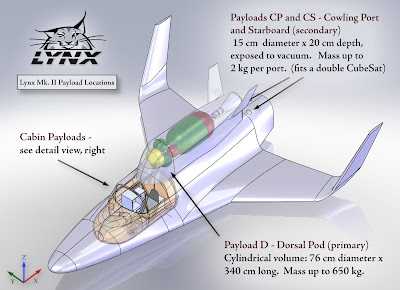 XCOR’s stated plans are to develop an upperstage that can ride inside of the Dorsal pod to launch Nano-Satellites.  the Lynx would act as a first stage to get to 100km and the upperstage would take the payload to orbit. Here is an XCOR image of an upperstage launching out of the Dorsal Pod carrying a nanosat on board (perhaps my favorite XCOR image ever). 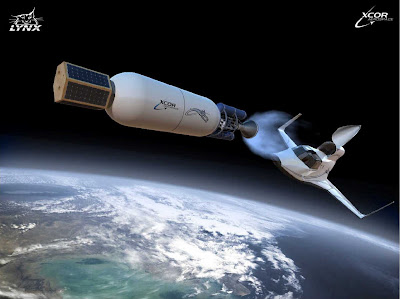 Here are a few of the XCOR Upperstage specs:
This discussion with XCOR’s founders got me thinking again about NanoSat launches themselves. The small payload market (which include nanosats) can be segmented by how time-sensitive their launch is:

I have said before how I believe package delivery to station to be a large portion of this “small payload” market because of the frequency of needed launches and ridiculously low integration requirements (how long does it take to load a bag of apples into a “no bruising” canister for launch?).

Now XCOR has a long way to go. A lawyer friend of mine reminded me last week when I was discussing this topic with him, “Yes, but XCOR has not flown their version 1 vehicle to altitude yet.” And he is right. The NanoSat launcher from a Dorsal Pod would be a Version 2 vehicle (at least), but…

…If I was to build a business to serve the small-payload-to-LEO market, I would want to secure a method to reach LEO as frequently as my customers needed. XCOR through their Lynx/Upperstage vehicle would provide an attractive solution if they can truly fly as often as they say they will be able to. It would not surprise me that, in the end, the market leader will be the company who can fly the most.
Posted by Colin Doughan at 11:25 AM