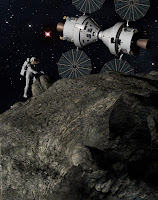 Lockheed Martin this week pitched a Manned Asteroid mission utilizing two linked Orion Spacecraft currently being developed by the company. Although LM admits asteroid mission planning is 100% internally funded, many within NASA have expressed an interest in the Plymouth Rock presentation. The basics:

The proposal is intriguing. A space entrepreneur has only has to read Mining the Sky to salivate over the potential of extraterrestrial resources available to us on asteroids. But in the near term, what I am most interested in as an entrepreneur is Lockheed’s plan to leave one of the two Orions in orbit after the manned asteroid mission - able to reused over multiple trips. This “stretch” Orion would forgo the heat shield in favor of modifications making it more conducive to long duration space flight. One Orion capsule (the one with a heat shield) would reenter with Crew and samples after each mission. The stretch Orion would remain in orbit ready for future asteroid missions or to serve as a long duration space lab in LEO.

This trend towards reusability is important and I am glad to see it promoted for three reasons:
Here are a few secondary missions for a stretch Orion (with profit potential):
How would you make money from a stretch Orion?
Posted by Colin Doughan at 2:10 PM