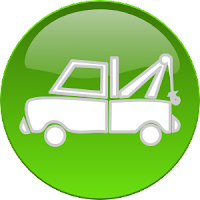 Is Human Space Flight more like the airline industry or the automobile industry?

In a recent post at Space News, guest-blogger Gordon Smith, Ph.D., acknowledges  the reality that Human Space Flight has not been truly commercialized while other highly complicated and risky industries have flourished privately.  Smith believes those attempting to commercialize human spaceflight utilizing an airline industry business model could be more successful by changing models.

Might the automobile industry provide a better business model for Human Space Flight to be patterned after? Cars and trucks are specialized for the needs of their users and onboard redundancies are minimized through the use of AAA, tow trucks, gas stations, and other readily available "emergency services" that are easily accessible to motorists on the road. Smith argues in favor of:
NASA could provide the rescue service or perhaps such a rescue service could be offered as a private venture:

Note: for these to be a help to humans in space, these vehicles do not necessarily need to be manned themselves. This quote from his blog post sums up Smith’s position:

“The automotive industry operates similarly to human spaceflight, if one looks at the broad operational behaviors. A vehicle departs from a certain location, travels for a period of time that may be limited or indefinite (but the car may pause as needed), and can return to any number of locations. However, the automotive industry prevents DTD and redundancy costs from growing prohibitive using government or private means to render assistance in the form of ambulances and tow trucks.

We gain so much by adjusting the human spaceflight industry model to better support their operations. Creating a means by which aid may quickly be dispatched to space stations or vehicles on orbit is within the scope of the 2010 National Space Policy, reduces the costs associated with human spaceflight and makes it easier for private commercialization to grow. Instead of having to counter every possibility, known and unanticipated, private vehicles and stations need only ensure that if something goes wrong, their occupants will be able to safely wait for help. This is an improved response over escape pods currently under consideration, as it does not leave an abandoned asset worth billions of dollars to drift unattended in orbit, where it may easily be lost.”

Gordon Smith has also written this paper on the macro-economic impacts on the space industry where he strikes similar tones.  This paper warrants closer scrutiny.  Perhaps in an upcoming post.  For now, I like this quote from the paper:


"This emergency response capability, then, should be made a priority in forthcoming policy so that the long promised commercial sector may finally develop."

Posted by Colin Doughan at 8:50 PM