Will the Reusable Falcon 9 Kill the Suborbital Launch Industry?

With SpaceX’s announcement this week that the company would not only develop a reusable first stage for its Falcon 9 family of rockets but would make a completely reusable rocket system (I will use Clark Lindsey’s nomenclature: "rF9" for reusable Falcon 9), I have been wondering about the future of the young NewSpace companies developing reusable suborbital rockets.  Will companies like Masten, Armadillo and to a lesser extent XCOR and Virgin Galactic, survive this incursion from a well-funded NewSpace Cousin?
(the youtube video via Clark Lindsey's youtube channel.)
SpaceX has announced the company is developing the “Grasshopper,” a 100 foot-tall suborbital Falcon 9 first stage that SpaceX’s cadre of young, talented engineers will use to test this initial piece of the rF9.  SpaceX has NOT announced any intention to commercialize the Grasshopper.  But if Masten, XCOR, and Armadillo continue to delay bringing a product to market that can reach 100KM, and SpaceX continues to develop products in its typical rapid fashion, might customers ask to buy payload space on an upcoming Grasshopper test? 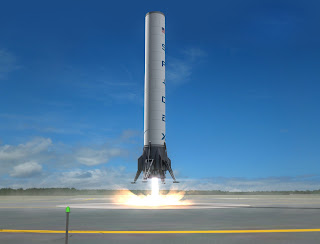 Or would SpaceX be willing to sell Grasshoppers to operators who then provide a suborbital launch service to users using the Grasshopper all before Masten has reached 100KM?  Could the unmanned Grasshopper be modified to carry passengers and compete with Virgin and XCOR?  If an operator came with funding, wouldn’t SpaceX take their money to make the modifications to "manrate" Grasshopper?
But the big money is the orbital market.  Most of the suborbital companies have expressed interest in using their suborbital experience and even their suborbital vehicles to expand current offerings to include an orbital system.  XCOR has published this image of an orbital capability. 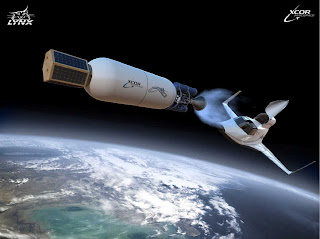 Virgin Galactic even took investment money from the to jump start their orbital program.  Could an rF9 meet all market demand for both suborbital and ultimately orbital launches as well?  And if they do, are the current suborbital companies doomed?
It all comes down to money.
How cheaply could SpaceX really launch their new rF9?  We don’t know.  SpaceX does not even know yet.  But we can make some interesting estimates.   The heart of these projected orbital price reductions stems from reusing the rF9 like Southwest reuses its 747’s (which can fly commercially for 30 years with proper maintenance).  How many reuses is SpaceX planning on?
At this point, the best data I have is a nugget SpaceX's CEO, Elon Musk, said this last week that he is targeting $500K trips to Mars as a market for his reusable craft.
Let’s make some assumptions so we can approximate SpaceX’s reusability assumptions:
SpaceX breaks even after 47 flights (but that is a lot of assumptions).  here is a table to help visualize the math:

Assuming a 47-flight amortization, what could be SpaceX’s breakeven price per KG to LEO?  Or to say it another way, how low would the suborbital company’s prices have to be to beat SpaceX?
Again, let’s make some assumptions:
Based on these assumptions, SpaceX's breakeven Price to LEO for rF9 is $130 per KG or ~$1.4M per flight.  Again, here is a table to summarize how I came to this conclusion.  At the end of this post is a link to an interactive spreadsheet where you can modify these assumptions to create your own analysis.

These SpaceX prices are surely the most optimistic for the near term:
his analysis would indicate:
So how can XCOR and Masten compete?
I continue to be bullish regarding the utility of Nanosat-class launch vehicles.  When suborbital companies start offering orbital services (a second generation service), their initial orbital offerings would probably be within this Nanosat class - broadly speaking, payload space significantly under 100kg.  Is there still a market for suborbital companies to offer this type of orbital service?  Even if SpaceX may be able to now match (or beat) them on price?
Yes.  Here is why:
Sometimes smaller is better.  The smaller vehicles these suborbital companies will eventually offer on orbit should:
Nanosat launchers are the future, but only if their ops tempo is fast enough to justify paying a premium for preferential launch windows.
This advantage of the small won’t last forever.  SpaceX will keep improving its initial RLV offerings.  Spaceport operations will grow to allow for more airline-like ops tempos.  So Nanosat launch operators (today’s suborbital companies) will have to keep improving too.
But there is a market for Nanosats and it hinges now on ops tempo.  There is hope.
The bigger worry…
…is in the near term.  I mentioned earlier, I doubt SpaceX will pursue commercializing their Grasshopper suborbital vehicle.  But they may be open to selling this suborbital vehicle for others to operate.  Such a suborbital operator flying the Grasshopper would have tremendous suborbital market advantages and could be a major competitor to those suborbital companies focusing on suborbital research (Masten, Armadillo, etc.).
Suborbital companies should be worried, but not panicking.  If the reusable Falcon 9 hastens the development of viable Nanosat launchers, the industry will be doubly blessed – low launch costs from the rF9 and high ops tempo from Nanosat launchers.
Here is the interactive spreadsheet so you can build your own rF9 assumptions.
Posted by Colin Doughan at 7:41 PM