Business accelerators in Silicon Valley (CA), Boulder (CO), and across the US have been gathering the best young entrepreneurs, providing them the time, resources, and business connections necessary to start successful software companies.  These accelerators have helped such success stories as AirBNB: now worth $2.5B and DropBox: now worth $8B.

Can the lessons from software-focused business accelerators be modified to benefit commercial aerospace firms (referred to here as “Newspace”) that need to develop physical hardware (not just software) with correspondingly longer product development cycles?  Are hardware-based accelerators possible?  If possible, what would these accelerators look like?  Below is an overview what accelerators are and my fourteen recommendations for enhancing the capabilities of Newspace accelerators.

For many, YCombinator wrote the definition of what an accelerator is.  Located in the Silicon Valley, YCombinator helps software startups succeed.  Twice per year they bring in a bunch of startups (from thousands of applicants) and invest in each firm ($20K for 3-7%).  In the early days, only a few firms were funded, recent batches have included over sixty startups in a single batch.  Over the course of three months (the length of the “batch”), YCombinator helps startups mature.  Some firms need help with an idea for a product, others with introductions (access to the YCombinator Rolodex), still others need help navigating the pitfalls of a growing software startup.

Each batch culminates in Demo Day where each startup pitches to venture capitalists (and occasionally, Ashton Kutcher).  Both Air BNB and DropBox (mentioned above) were accelerated via YCombinator.  Many of the companies in each YCombinator batch…FAIL.  But the YCombinator assumes this failure will happen.  The compensation from wildly successful firms more than compensates YCombinator for the cost of the failed companies.  Since YCombinator does not know who will be successful at the outset, if the entrepreneur team is accepted into the YCombinator program…they get funded.
YCombinator combines:


For simplicity, I will use “Accelerator” generically throughout this post to mean the combination of both advice and capital. 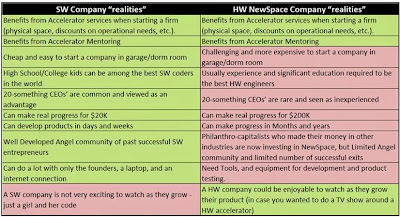 Silicon Valley Space Center is a Newspace accelerator in the heart of software country (Sean Casey, Managing Director).  They provide frequent events (Hackathons) and networking opportunities.  But although SVSC makes introductions to angel capital, they lack a startfund of their own.  Space Tango is a more serious attempt to mirror YCombinator.  Space Tango has three month “batches” where participants relocate to Kentucky for a 12-week training program.  Space Tango has a startfund ($20K for 5% equity), with follow-on rounds possible.  Space Tango offers mentoring and accelerator services, but is a young organization, having only raised a $100K startfund to date.  The announcement of Space Tango’s initial batch should be made in the next few weeks.


I posit that Newspace ventures succeed faster with four accelerants:


1.  Low Capital to Start.  Reducing the Capital requirements necessary to successfully fund a Newspace startup is a goal that both focuses the mind of Newspace entrepreneurs and focuses the efforts of support organizations like business accelerators.  For most entrepreneurs, proposing the business plan that requires hundreds of millions of dollars to execute and needs only one starry-eyed billionaire to agree is NOT a good recipe for repeatable success.  Even when the entrepreneur proposes a manageable business concept, accelerators add value by reducing costs for infrastructure services (e.g. office space, etc.) or access to capabilities that startup would normally not be able to afford (e.g. vacuum chamber for testing prototypes).  YCombinator has brokered a deal with Comcast to provide each startup extremely fast internet connection for their three-month stay in Silicon Valley.  What are the services from which a Newspace startup would most benefit?

2.  Speed to Market.  Minimal Viable Product (MVP) is a term common in software startups thanks to the work of Steve Blank and Eric Ries.  Like the name suggests, MVP’s push a startup to get a product into the hands of customers as soon as possible.  The MVP joke is if you’re not embarrassed by your MVP, your MVP is too mature.  MVP’s give entrepreneur early revenue and, more importantly, they give startups feedback from customers.  Although you don’t hear pharmaceutical entrepreneurs or nuclear power plant startups talking about MVP’s very often, the advent of Cubesats, NanoRacks-based ISS applications, and greater use of Commercial Off-The-Shelf (COTS) technology on space projects enable the MVP concept to be added to the Newspace startup lexicon.  Two-year projects are preferred to five-year projects.  Are their ways the startup can commercialize a subcomponent of their “Two-Year Project” and get to market in one year?  As a general rule, faster to market is preferable.  Note that faster to market will reduce capital requirements also (linking #1 and #2).

3.  Capital and Liquidity Opportunities.  How do we get Angel investors in an industry?  Altius’ Jon Goff said something profound in a Thruster issue about a year ago that has stuck with me.  In other industries like tech, a good-sized portion of the industry’s Angels are created from successfully exiting entrepreneurs that now have experience and capital and still want to be involved in the industry.  However these successful entrepreneurs are not ready for the hard work of starting a second startup.  The profound part of Mr. Goff’s article is acknowledging how few exits Newspace has to its credit – thus the number of industry Angels may also be reduced compared to other industries.  While industry loyalists wait for the Angels to arrive, an accelerator could be very helpful here, introducing Angels from other industries to Newspace.  This work would supplement the good work the Newspace Global and many others are already working in this arena.  As discussed above, YCombinator not only offers capital from their startfund, but also brokers countless introductions between startup and capital sources.  With each introduction, YCombinator’s capital rolodex grows.  With each successful startup to graduate the program, YCombinator’s alumni network grows as well.  Both are important.

4.  Industry Awareness.  Newspace, focused on commercial aerospace projects, would greatly benefit from a higher industry profile.  Many still are unaware of the unshackling from Government contracts that is underway within the aerospace industry.  Accelerators can help significantly here.  By aggregating Newspace startups into a single effort, accelerators may be more influential to news organizations and those peaking over the fence into Newspace from the outside.  In the same way #1 and #2 are linked.  Note how #3 (capital and liquidity) are linked to #4 (industry awareness).

Here are Fourteen Ideas for enhancing a Newspace hardware accelerator:


These ideas are expensive.  If an Accelerator offered $200K to five ventures per batch, that is $1M per year in equity capital investment.  Plus another $1M in operational costs to maintain the makerspace/co-working space, staff salaries, testing assistance for startups, etc.  $2M in annual obligations may be challenging to achieve.  However, an underfunded Accelerator loses much of its value and thus loses much of its appeal.

*********
Dream with me.  After months of interviews and intense deliberations, SpaceCombinator selected its latest batch of Newspace startups.  Co-locating to Boulder, CO was an issue for some, but in the end the value of the six-month program, the access to all of the major aerospace firms along the corridor to Denver (and the occasional trip to the mountains) made the co-locating rule manageable.  $200K for 15% equity stake gave each selected firm an immediate $1.3M valuation.  SpaceCombinator chose the majority of firms for their ideas, but a few firms were selected because the selection committee was impressed with the founders (even while the product idea needed to be rethought).  Over the six-month batch, the firms worked with staff to develop products customers will buy.  A few firms switched products after R&D efforts indicated a needed pivot.

SpaceCombinator provided a steady stream of guest speakers from both small and large aerospace firms at the weekly dinners.  NASA spoke one night.  DFJ’s Jurvetson spoke one night.  The in-house makerspace enabled a quick validation of design assumptions, and made conversations with customers more productive with tangible prototypes to discuss.  The teams were constantly iterating (iteration has always been the best type of failure).  Hardware tests were conducted via partnerships with the big aerospace firms.  One firm even flew suborbitally (twice).  Another batch-mate is on the manifest for an upcoming NanoRacks flight to the ISS.  SpaceCombinator’s alumni list is growing.  With a handful of successful exits and several dozen going concerns, alumni firms share a special bond with the current batch and look for ways to help these startups in the same way they were helped by even earlier batches.  Greybeards, SpaceCombinator’s group of seasoned veterans, taught several founders to weld, helped two startups understand the complexity of ISS-based deployments and introduced at least one firm to those within NASA’s ISS-utilization office.  The separate group of C-Suite executive veterans made the rounds to each of the startups.  They gave advice, asked questions, listened to Pre-Demo Day pitches.  One exec did not wait for Demo Day, she accepted an offer to join one of the firms as CEO.  The firm’s founder was only too willing to move to the CTO role to make room for the more accomplished CEO.  An unforeseen benefit has been the amount of cross-fertilization of ideas and methods that has come from co-locating the startups at the makerspace.  Teams come out of their offices to see what their batch-mates are working on.  All are motivated to build more and do more when others are watching.

And it all culminated in Demo Day.  NASA, Angels, VC’s, Lockheed Martin, Boeing, Northrop Grumman, Ball, NanoRacks, and others were all there.  Each firm in the batch took turns sharing slides and demoing hardware.  One firm had only that – a vision and limited HW model to show for their six month effort.  But several had strong stories of flight-demonstrated hardware, paying customers, and a plan for growth and profits.  One firm could already announce true revenue with presales from an upcoming commercial rocket flight.  SpaceCombinator took the concepts pioneered by software accelerator and made them work for hardware startups going to space.
Posted by Colin Doughan at 9:36 PM 2 comments: