Thank you Jeff.  Jeff Greason eloquently explains "Why Space?," and "Why do we need a frontier?"  I especially love this quote...


But the most important element of a frontier is psychological, because it is hard to sustain that believe in limits - that belief in the zero sum game - when you can see, stretching before you, new lands - untamed, untapped.

Posted by Colin Doughan at 9:19 PM No comments:

Remember the days of reading the Armadillo updates every Monday?!  I miss that level open communication by a New Space company.  I know some of Armadillo's customer's prevent them from sharing everything, but I enjoyed feeling a part of Armadillo's efforts each week.

That is why I am excited that Altius Space Machines just announced an intense effort to mature their "Sticky Boom" docking tool.  And through that "sprint" as they call it, Altius intends to blog daily on their progress - good or bad - words or pics or video.  Their website makes it sound like a pretty aggressive development schedule to develop their "Sticky Boom".

The Altius website described Sticky Boom as a long boom with a sticky pad on the end that can:


get meaningful adhesion to almost any material imaginable. Plastic, metal, rock, ceramic, MLI or MMOD blankets. Flat surfaces, curved surfaces, multi-faceted surfaces, completely random surfaces like NEOs. Even dust or regolith for that matter. You get all of the “contact at a distance” benefits that Kirk and Joseph Bonometti talked about, while also enabling secure connection with “non-cooperative” objects like uncontrolled satellites, Mars Sample Return sample canisters, space junk, and even asteroids or comets.

Altius says they have one month to get a Sticky Boom prototype ready for a ZeroG micro-gravity flight in May 2011.   This "sprint" should be fun to watch.   Good luck Altius Space Machines - we are cheering for you.  Follow Altius's Sprint here.
Posted by Colin Doughan at 9:32 PM No comments:

When you Are on the Moon you can Touch it!

In school this week, my son learned about his senses.  In an effort to describe the difference between "sight" and "touch" the teacher used the moon as an example.  "The moon is something we can see but not touch," my son's teacher explained.  Incredulous, my son announced,

"When you are ON the moon you can touch it."

Asteroid Prospecting in the Triangular Equilibrium

A few months ago I analyzed a SpaceDev/NEAP-style commercial NEO prospecting mission.

An interesting asteroid report last week has made we consider a Hybrid NEO prospecting/research mission:

A few thoughts on the timing challenges of a prospecting mission of any kind:

2010 SO16 is unlike most NEOs and at 7.6 km/sec of delta-v to reach, it may offer an attractive target for a NEO prospecting mission. Some quick facts: 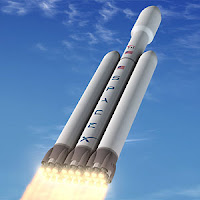 With the announcement from SpaceX yesterday about the Falcon Heavy, I went back over the recent missions I had been analyzing here at Space Business Blog to determine if any of them would benefit directly from the Falcon Heavy’s superior performance and reduced per pound launch cost.

The Answer: No. Well, mostly no.

Let me explain. Most of the innovative missions I had been considering were near term missions that could be performed on a single launch without the added capability of the Falcon Heavy.


But here are a few humble thoughts on why a Falcon Heavy changes the game:

**UPDATE:
Next Big Future offers this great cost comparison between the EELV launch costs of ULA and SpaceX:

Even if you DON'T have $80M+, the Falcon Heavy announcement changes how the whole world plans their space missions - even New Space.