In response to recent blog posts about LEO tugs servicing Iridium’s satellite constellation, readers have been asking me about other uses for orbital tugs.

One tug use that keeps coming up in our discussions is a LEO to GEO transfer tug. Such a tug would pick up a payload in LEO and transfer the payload to GEO, drop the payload off in the correct orbit, and return to LEO for its next payload.

Although there are some intriguing propulsion technologies on the horizon that make the case for such a tug easier to close, could a transfer tug be developed today with today’ s propellants to serve the extreme ends of the GEO Satellite market (projected for the next decade to be 20-25 satellites per year)?  I focused my analysis on two GEO market segments:
So I did some analysis (yay, spreadsheets!).

With current propulsion, could a LEO to GEO transfer tug work for:
Currently the largest GEO ComSat could theoretically have a mass of 6,276kg if launched on a Delta IV Heavy (correct me if I am missing a commercial rocket offering a larger BOL value for a GEO sat). I have heard of prices for this type of launcher ranging from $150-200M (maybe more). Since such a satellite in my example would push the boundaries of the capabilities of the Delta IV Heavy, I used the upper end price point of $200M to GEO.


Here are my Assumptions:

1. Since propellant cost drives the price for this venture, true price reductions come not from increasing demand but from:
2. Once in GEO, could the tug make more money after dropping off its payload and prior to returning to LEO? Two thoughts:
3. Entrepreneurs reading this would want to calculate desired IRR to determine attractiveness of opportunity to investors. I have only considered a breakeven price.
4. The Delta-IV Heavy does not fly very often. This Falcon 9/Tug solution offers increased flight opportunities in addition to the cost savings already mentioned – frequent launch opps alone may make this venture valuable to customers.
5. Because SpaceX’s Falcon 9 becomes much more attractive for Mega ComSat operators when including a tug, SpaceX may be interested in being involved in a commercial tug venture.
6. There are going to be some elements of this analysis I get wrong. Assume I made mistakes. I welcome the corrections. 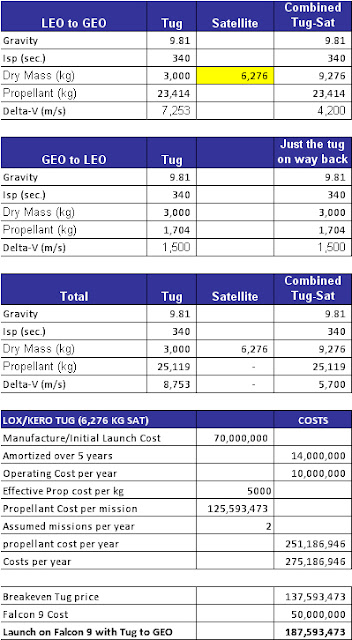 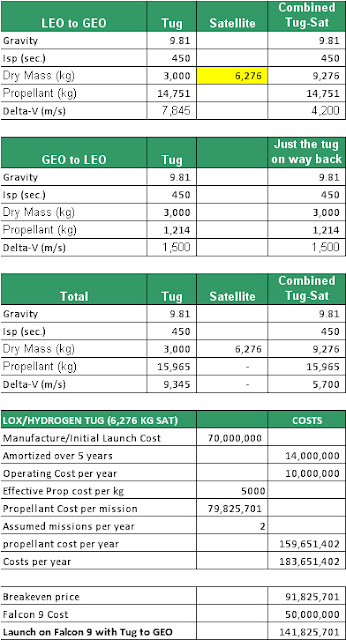 ﻿Click here to play with the interactive spreadsheets.
In the next post in this series, I will walk through the math for a 10,000kg satellite to GEO (bigger than anything currently in GEO), and the numbers look even better – all from a Falcon 9 and a transfer tug!﻿
Posted by Colin Doughan at 11:36 PM