My interview with Alan Wasser on Lunar property rights definitely generated discussion (including recommendations for changes to the draft bill - thanks everyone). For those not familiar with the space land claims recognition bill, here are the three main points:
Again, if you want more details, read the draft bill here. Or comment on the draft bill here. Since this blog focuses on the business side of the space frontier, what would a successful business case for a moon base need to look like (assuming Alan’s draft bill were passed by Congress)?
On the surface this seems like an odd question – can't one build a profitable lunar base for $40B, (assuming $100 per acre)?  Surely $40B is more than adequate not only to recoup investment costs, but to generate an enormous return to investors. But, remember one would have to maintain the base by providing regular transport to and from the moon indefinitely. How long could such a base operate on that one-time cash infusion of $40B before the base would have to start generating enough revenue to offset expenses? Since such regular transport to and from the moon will no doubt be expensive (even using innovative commercial solutions), I believe the revenue portion of the equation will have to be pretty high to offset both base and transport recurring costs.
Don’t hold me to the numbers below, they are for example purposes. You are welcome to build your Moon Base Spreadsheet here, but lets take a look what the numbers say. 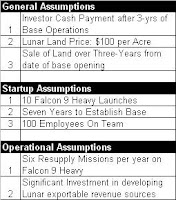 And now an initial set of detailed costs: 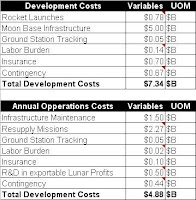 Now we bring these together in the Pro Formas: 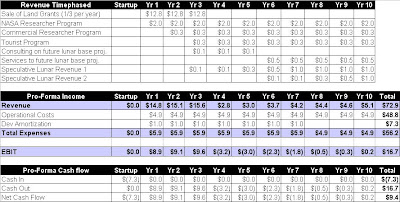 Here are a few humble Observations:
This exercise was very helpful to me. I often need to experiment with a spreadsheet to consider the implications of an idea. Feel free to modify these estimates – again the full spreadsheet is located here.  Can you operate a base for $5B per year? Won’t NASA pay close to $5B per year for access to a lunar base? Do you really need six resupply missions per year?  What if four resupply missions per year were adequate? How do lunar cyclers reduce base operations costs? What would revenue sources like television and marketing rights be worth? What "exportable" revenue sources offer the greatest potential of near-term profits?  All fun elements to go consider.

The big takeaways for me are:

Posted by Colin Doughan at 9:57 PM