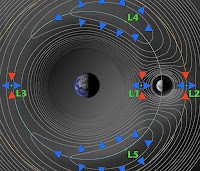 In my FIRST post in this series, I discussed the benefits of a Falcon-tug architecture to transfer very large comsats from LEO to GEO (saving money over the Delta-IV Heavy price).

In  my SECOND post, I discussed the potential of a Falcon-tug architecture to carry a 10,000kg comsat to GEO (59% more payload than is currently possible on a Delta-IV Heavy).

In this, my THIRD post, I will discuss lagrange points.

I do not intend to describe why one would use EML1, Rand Simberg and many others have posts on this topic if you are unconvinced.  Here is a Simberg lagrange post from 2006 in which he articulates several reasons to utilize EML1.  Instead, I will focus on the financials of such a mission.

Using a Falcon 9/Transfer Tug architecture, what interesting payloads could you transport from LEO to EML1 (instead of GEO)? And at what cost?

The funny thing about orbital dynamics (which I am only a new student), if you can launch 10,000kg to GEO for the prices outlined in the previous posts, you can also launch 10,000kg to EML1 for even less.  Below is a visual of the Earth-Moon transportation energies (at Delta-V Scale).  It highlights how close GEO is to EML1 (and the moon for that matter) based on energy needed to get there.
﻿﻿
﻿﻿
﻿﻿
﻿﻿Earth Moon Lagrange Point One (EML1) would make a interesting location for a space station and Bigelow’s Inflatable Sundancer module has a mass of 8,618kg – too large to be launched to L1 (or GEO) on an existing launcher (including Delta-IV Heavy) which top out a little over 6,000kg, but with the Falcon/tug transfer system described in these posts, a Bigelow Sundancer module could be launched from the earth's surface to EML1 for between $145-191M:

Since each station may consist of multiple Sundancer modules, some EML1 assembly may still be required.  But multiple missions to EML1 amortizes the fixed costs over more missions and could lower the price further.
Here are my Assumptions:

Observations:
1. Since propellant cost drives the price for this venture, true price reductions come not from increasing demand but from:
2. Once in EML1, could the tug make more money after dropping off its payload and prior to returning to LEO – what uses would you have for a tug in EML1?
3. Entrepreneurs reading this would want to calculate desired IRR to determine attractiveness of opportunity to investors. I have only considered a breakeven price.
4. Because SpaceX’s Falcon 9 becomes much more attractive for Comsat operators and for Bigelow when including a tug, SpaceX may be interested in being involved in a commercial tug venture.
5. There are going to be some elements of this analysis I get wrong. Assume I made mistakes. I welcome the corrections. 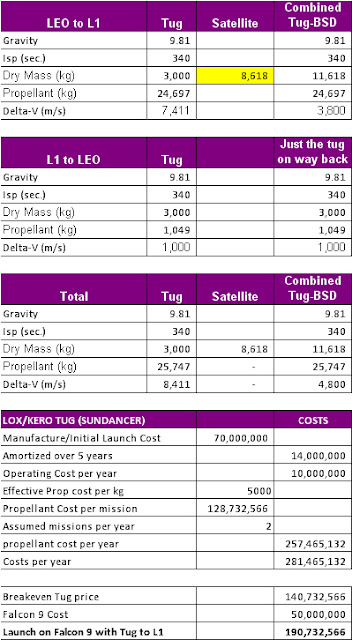 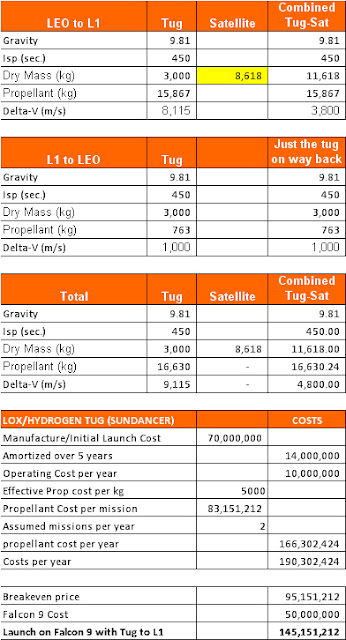 Click here to play with the interactive spreadsheets for all three posts (in one file).

With these three posts I highlighted ways to launch comsats cheaper and larger than on a Delta IV-Heavy and to new and valuable destinations.  But LEO-to-GEO transfer tugs aren't the only way.

One friend reviewing this analysis prior to posting was quick to mention the value of simply refueling the upper stages in LEO and bypassing the need for a LEO-to-GEO tug all-together (but needs a propellant depot instead).

Which idea will blossom first?  The most profitable one (and the lucky one...but mostly profit).  Good luck entrepreneurs.
Posted by Colin Doughan at 11:38 PM