Would a Reusable Falcon Hurt SpaceX?

What happens if SpaceX is successful at achieving its Falcon reusability goals.  Here is the video of SpaceX’s plans to recover and reuse the majority of its Falcon launch system.

Let me make some assumptions about a Reusable Falcon (R-Falcon) to make my point that such a system may pose challenges for SpaceX.

On the surface, an R-Falcon would be great.  If my assumptions below are accurate, only $16M per flight, a flight every 30 days, only two thousand dollars per KG.  From a consumer perspective this would be great!  SpaceX is adding reusability to the large rockets they already have.  And they will probably be successful at it.  They do seem to achieve what they put their mind to, however, could there be an easier road to reusability?  Let’s explore the possibility.  First what could a large reusable system like SpaceX’s look like (dollars values in millions)? 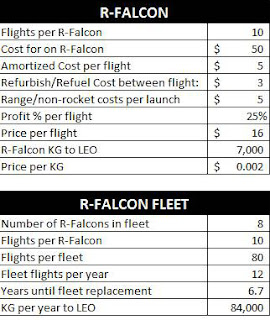 I am still amazed we can’t build Saturn V’s today.  We built them before.  We went to the moon in them for goodness sake!  We knew how to build them…why don’t we know now?  Two major reasons:
Surely such a reusable system like the R-Falcon could avoid these Saturn-V pitfalls…right?  If you look at the table above you see I estimated SpaceX builds eight initial R-Falcons.  This high number addresses the unknowns about number of flights per R-Falcons.  Will it really be 10 flights per vehicle as I estimate?  And how long will it take technicians to refurbish and integrate the next payload? 6 weeks?  8 weeks?  With flights every month and 6-8 week refurbish and integration windows, multiple R-Falcons will be needed.

So here is the problem.

After the initial push to develop the R-Falcon fleet, at the usage rates outlined in the table, you would NOT NEED TO BUILD another R-Falcon for 6.5 years!

So SpaceX could avoid throwing away their tooling (unlike the Saturn V), but could they keep a knowledgeable team around ready to build the next R-Falcon 6.5 years after the first fleet was completed?

And even if you believe eight R-Falcons in the initial fleet is too many and want to reduce the fleet size, demand rates of one per month means SpaceX would only need to make approximately one R-Falcon per year to keep up with demand.  Not exactly mass production – 1 vehicle per year.  Can you keep the production team “sharp” on 1 vehicle per year?

Let’s talk about an alternate business approach that could address some of these challenges.  I said above that my hypothetical R-Falcon has two problems: 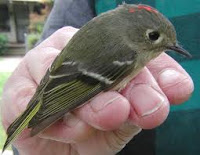 How could a new hypothetical company do reusable launch better?  What if you launch less mass but launch more often?  So let’s make up a hypothetical launch system – the “Kinglet.”  Since this is a business blog, let’s not get bogged down into the technical details except that instead of launching 7,000KG per flight, the Kinglet will launch 100KG.  And instead of paying the R-Falcon’s $5M for range access per flight, the Kinglet pays $200K per flight for its range or range-like services (airport, spaceport, other?).  Here is the table for such a system (dollars values in millions). 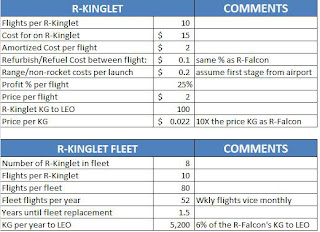 The Kinglet is a smaller launch system but aims for a higher flight rate, targeting weekly flights instead the R-Falcon’s monthly flight rate.  As a potential customer, I do not like the 10x higher price I pay to use Kinglet ($20K per KG vice the Falcon’s $2K).  But flying weekly may be attractive to some customers.  Overall though, this appears to be bad for customers (most customers could wait a month to fly).  But from a business perspective, all things being equal, a small reusable launch system like Kinglet has a much higher probability of success because it starts small.

Where the Falcon struggled to keep its production line open with only one new vehicle per year, the Kinglet will need to produce five systems per year to keep up with demand.  Now five launch vehicles per year is still not mass production, but those volumes will, not only keep the production team sharp, but provide five times the opportunities to roll in product and production improvements into the newer vehicles than would be possible on the R-Falcon production line.

So the last question to ask is, what needs to be launched at least weekly with a mass of under 100KG?

Here is the excel file with tables from this post if you want to change the assumptions. 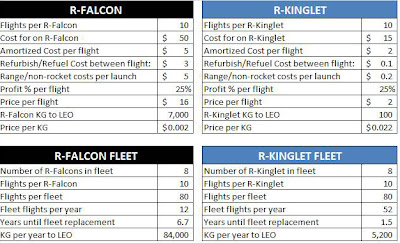 Posted by Colin Doughan at 9:19 PM